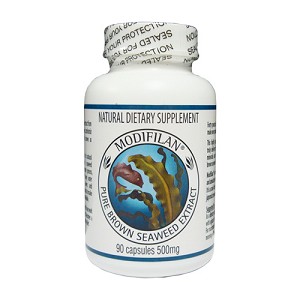 For assistance in getting Modifilan at affordable price contact me directly.

The powers of seaweeds have been drawn upon for centuries for their ability to prolong life, prevent disease, impact beauty and health. Worldwide research is continuously being done and brown seaweed has been found to be the most beneficial type.

Brown seaweed (Laminaria japonica, or kombu) is rich in organic iodine, fucoidan, alginates, fucoxanthin, laminarin and other mineral values. It also contains all of the 72 different trace minerals, which are often lacking in people living in the Western hemisphere, particularly the U.S. Here’s a breakdown of brown seaweed’s stellar health properties:

Organic Iodine feeds the Thyroid Gland, which controls metabolism and promotes maturation of the nervous system. Iodine is important for thyroid disorders, wherever underactive or overactive. Most people think iodine is only beneficial for the thyroid, but it’s actually important for other organs of the body as well, including breast and prostate gland tissue.

It is believed that the rates of breast cancer in Japan are significantly lower than they are in the Western world because the Japanese consume higher quantities of seaweed. A sufficient level of iodine reactivates the thyroid, and consequently regulates other glands and organs, including the pancreas, gall bladder, kidneys, adrenals, and even the liver.

Alginic acid, also called algin or alginate, is an anionic polysaccharide that exists in the cell walls of brown algae. The alginate content of brown seaweed detoxifies the body of strontium, uranium, mercury, lead—and hundreds of toxic chemicals that we’re exposed to in modern society. Such toxins, which become embedded in the heart, kidneys, liver, brain and other organs, are effectively eliminated from the body by sea vegetables, particularly brown seaweed.

Fucoidan causes certain types of rapidly growing cancer cells to self-destruct according to the Biomedical Research Laboratories of Takara Shuzo and the Research Institute for Glycotechnology Advancement. This phenomenon of cancer cell “self-destruction” is known as apoptosis, which is caused by a mechanism that is programmed into the nature of the cells themselves. When the apoptosis mechanism is triggered within a cell, the cell’s DNA or genetic blueprint is rendered useless, and therefore destroyed. Apoptosis has been referred as the natural process through which living organisms expel harmful cells.

Approximately 4% of the total dry weight of brown seaweed consists of fucoidan.  Fucoidan is a sulfated polysaccharide, also referred to as an “evaporated oligomineral,

The health benefits of fucoidan have been published in more than 600 scientific articles in The National Library of Medicine. The research shows that fucoidan’s therapeutic properties include immune system enhancement, relief of digestive/intestinal disorders, allergy control, improvement of liver functions, powerful anti-oxidant action, cholesterol and blood pressure regulation, blood sugar stabilization and the promotion of healthy skin and hair.

Laminarin is a polysaccharide helpful in the prevention and treatment of cardiovascular diseases. The laminarin content of brown seaweed is a great natural source of energy.

Fucoxanthin in brown seaweed is credited with efficient fat-burning. However, fucoxanthin does not accomplish this by  itself. Therefore, taking fucoxanthin supplements will not do the trick. Rather, fucoxanthin works in combination with the mineral iodine that’s also present in brown seaweed. When the thyroid is supplied with a sufficient amount of iodine, the endocrine system is rehabilitated and functions more efficiently—and this increases your body’s metabolic speed, thereby enabling your body to burn calories faster and prevent the accumulation of body fat.

These elements, treasured in brown seaweeds, are enhanced by special cold-temperature extraction technology, which does not break their molecular structure. And MODIFILAN is not just another dry seaweed product – it is highly concentrated product. The low-temperature processing of Modifilan causes a sloughing off of the heavy outer fibers of the seaweed, while retaining the essential properties of the plant. This process further enhances its bioavailability, making the Laminaria more digestible. FORTY pounds of raw Laminaria is needed to make ONE pound of MODIFILAN.

Modern science has confirmed that the important substances in seaweed are broken down if the seaweed is cooked. This was determined when studies were performed on the Japanese island of Okinawa. Consuming 8 capsules of Modifilan per day provides the same amount of good, organic micro and macro-elements contained in an entire raw plate of this nutrient-rich seaweed.

MODIFILAN is manufactured in the United States, available in retail packaging. It comes to you in plastic bottle, which contains ninety 500 mg capsules each.

A Note About Sourcing from the Manufacturer:

The raw materials are harvested in the SE Pacific Ocean – one of the few places where larger Laminaria species are still found in the wild habitat. All raw supply is tested for isotopes at the point of entry by USDA before it is released. Every new batch of finished material is tested for microbio/heavy metals.

Because of the publicity that brown seaweed has received in recent years, including a feature article in Time Magazine, it’s not surprising that most people are heading to the nearest health food store and buying brown seaweed. However, there is a danger is simply buying brown seaweed in the form of kelp, or kombu-or kombu powder as a dietary supplement.

Warning: Consuming large amounts of kombu can actually backfire on your pursuit of health because kombu consists of indigestible cellulose or non-soluble fiber.  Even taking a teaspoon or tablespoon of kombu powder, which appears finely ground, can feel like shrapnel to your colon because it is an insoluble substance.  Diarrhea or constipation is likely to occur in  those who start eating kombu in larger quantities than their bodies are accustomed to.